For one Phillipsburg, PA, a little girl’s leukemia became the lightning rod for science and faith to strike together and co-exist for a cure. In Praying for Emily: The Faith, Science and Miracles that Saved Our Daughter, Kari and Tom Whitehead share their family’s incredible journey through childhood cancer as faith and science together cured their daughter.

Tom, a lineman for the power company, and Kari, a nutrition researcher for Penn State University, have founded the Emily Whitehead Foundation to fund new immunotherapy treatments because of the way they watched this revolutionary treatment heal their daughter. Kari’s background in nutrition research had brought her into the lives of cancer patients working on finding the right diet as they underwent treatment, but she found herself putting her skills to use for her own daughter.

“I knew how to read medical literature, how to search for medical trials,” she explained. “Emily’s leukemia became resistant and a clinical trial had just opened. I had researched immunotherapy, so I started to understand that you use your own body to fight cancer. It’s less toxic than radiation and chemotherapy. The therapy opened the day before we called at the Children’s Hospital of Philadelphia.”

While Kari tackled the science side of the equation, Tom knew that Emily needed people to pray. “Kari and I were raised Catholic,” he shared. “My mother brought healing clothes and oil to the hospital. I felt strongly that when I prayed I could see clearer and we could put it together with Kari’s scientific research. We had churches all over the place start to do fundraising. There was an outpouring of prayer – twenty-nine thousand were people praying for her through her Facebook page when things got their worst. I actually felt like – I had a whisper – a vision of her getting better a few weeks before she got better.”

The Whiteheads saw the way that science and faith both had a hand in Emily’s recovery, and wanted the story to be told so people can hear both sides. They have been approached by people who lost their faith and saw it come back while watching Emily’s story unfold on social media and in the news; the doctor in charge of the research told Tom that he didn’t pray himself but he believed in miracles after watching Emily recover. 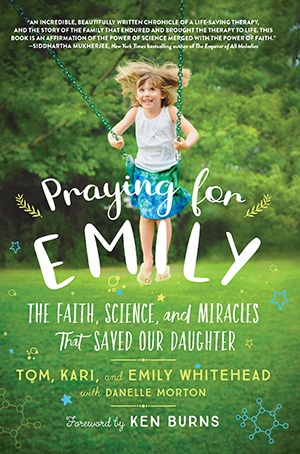 “He said, ‘You made six decisions that saved Emily’s life. If Emily didn’t survive, this treatment was over. Now it’s a fourth pillar saving people all over the world.’ For me, I felt like you don’t have to separate it.”

Tom remembers the night that a doctor approached him and told him to gather Emily’s family because she wasn’t going to live through the night.  Tom remembered saying, “I told him, ‘I happen to know she’s going to get better.’ The doctor replied, angrily, ‘There’s less than one in a thousand chance she’s alive tomorrow when the sun comes up.’ I replied back, ‘I’ll see you for rounds tomorrow.’”

Now, the Whiteheads all had a hand in telling their story. Kari shares the science; Tom shares about the way prayer worked; and Emily shares about the impact her story has had on others. “When she was little, she didn’t understand the attention,” Kari explained. “Now she understands the impact she has, and that it’s important to talk about her story to help other people. People come up and tell her all the time that they find hope in her story – someone fighting cancer in their family – that it gave them inspiration to get through it.”

Now, the former child cancer patient is a fifteen-year-old tenth grader with aspirations to make film and other works of art. She even spent time on the set of Steven Spielberg’s set, watching him direct the West Side Story remake. She’s busy, mixing with celebrities, writing the final chapter of the book, living the life of a teenager.

But don’t be surprised if Emily and her parents enjoy each moment more than others, because they know what they’ve overcome and how God has been with them, every step of the way.

Praying for Emily: The Faith, Science and Miracles that Saved Our Daughter is out October 6.