I’m thrilled to bring you this insightful conversation with two women having a positive impact in the world of entertainment. Bridget Stokes and Vicky Wight have been making films together for many years, and they create deep and rich stories that have true emotional strength and wonderfully nuanced storytelling. As their latest feature film simultaneously hits theaters and on-demand, we were able to speak with Vicky and Bridget about the making of this rare and delightful family movie.

Suzy: I watched Boy Genius with my 14-year-old son Jack. He and I had a rare night to ourselves and I had this screener, so we made our popcorn and settled in to watch yet another kid-friendly film. And as it turned out, we had such a great time watching Boy Genius — and I realize you’ve accomplished something truly difficult.  This movie is written in a way to be appealing to adults and have smart messages and cool characters for my high school freshman to enjoy as well. It was wildly refreshing because we see so many movies that rely on cheap devices and sophomoric jokes.

I’d love to hear the story behind the making of this movie.

Vicky: Great! I’m so glad your son liked it! Bridget and I had finished our other film called The Volunteer and we were in the process of planning our next project together. Years ago, we had made a movie called Herman and Shelley, where she worked with a lot of child actors, and I was amazed at how beautifully Bridget worked with them. So, I wanted to write something specifically for her to direct that would bring this talent to the screen.

Now, I don’t want to be misunderstood, but I think we focus so much on girls today — and it’s important to focus on girls because we’ve all been left behind through every century! But along the way we have to be careful we don’t lose our boys. I have four nephews and these boys are amazing and thoughtful. But in our world today, we have to be careful not to judge every boy — boys who will become our men — based on the sins of those who have gone before them.

We’re in this wonderful renaissance for women and girls. And there’s something about looking at the boys, too, and finding a balance as we raise the next generation of men who want to do good. And so I love a great story about a hero and I loved the idea of you know, creating this wonderful little boy – just being exactly who he is.

Bridget: Also, it was important to us to make a movie that we could watch with our families. We’re not seeing a lot of content that’s good for families! I grew up watching the original Chocolate Factory and The Neverending Story. And while those were geared towards children, they always offered something for a range of ages, and it feels like now the world is playing to the lowest common denominator when you’re looking at kid’s film. We definitely wanted to start seeing those kinds of movies again; where you can watch with your whole family and everyone can get something out of it.

Suzy: That’s excellent because we seem to do battle in the trade-offs. Often if a movie is clean and wholesome, it tends to be dumbed down and overly simple. Why is it so rare to find the combination of great scriptwriting and family-friendly storytelling?

Vicky: Well, it’s much more difficult to write that way. From when we started, we knew we didn’t want to make movies where children were hurt, or women were hurt, or people were subjugated. That’s been a guiding force for us both. And will we ever make a violent film potentially? Yes, but the violence will not necessarily be the graphic kind of stuff we’re all spoon-fed — and our children are spoon-fed! Because the MPAA ratings are a great guide but they really don’t matter. If it’s in your house, your kids are going to watch it.

So for us to put something into the world that a kid could happen upon and not have to hear curse words or see something negative that would live in their psyche for years to come is really important for us.

We just finished our next film called The Lost Husband that has a faith-adjacent quality. We are getting strong feedback about the messages in the film .We’re really pleased about that because it’s a grown-up movie about falling in love and losing a husband, but children can watch this movie with their families and have grown up conversations with Mom and Dad. It’s a family movie. We think the same is true of Boy Genius. We were thrilled with the response from festivals and testing audiences because they are getting all the important messages, along with the levity and the fun.

Suzy: What’s the most important message for kids?

Bridget: It was great because Miles [Brown] was on Good Morning America a few days ago and the interviewer asked him, “What do you want people to get out of this movie?” He said, “I just want kids to understand. It’s okay to be smart. It’s okay to be a nerd. It’s okay to be who you are !” We were so happy to hear him say that!

Suzy: There’s also a message for women, girlfriends. Rita Wilson is simply perfect in bringing the character of Mary to life. There’s a scene between Rita and Nora Dunn at the diner. And while we really don’t like Nora’s character, she blasts Rita’s character with some pretty stinging words that felt like our emotions just got flipped.

Vicky: That was a very tough scene to create. Bridget expertly directed the quirky, magical realism so beautifully, but then there’s a serious drama between these two women as well. Nora Dunn and Rita Wilson were both excited to shoot that scene, and they both brought so much to it because they just were thrilled by the dynamic. I have to say, every time Nora delivers her lines in that scene, I cry. She’s so deeply connected to that character and those words. Nora is saying ‘no, you can’t apologize, I won’t fix it for you to make it better.’ We’ve already decided that she’s an evil woman yet in this moment, we feel her pain and we get insight into her brokenness. It’s complicated. 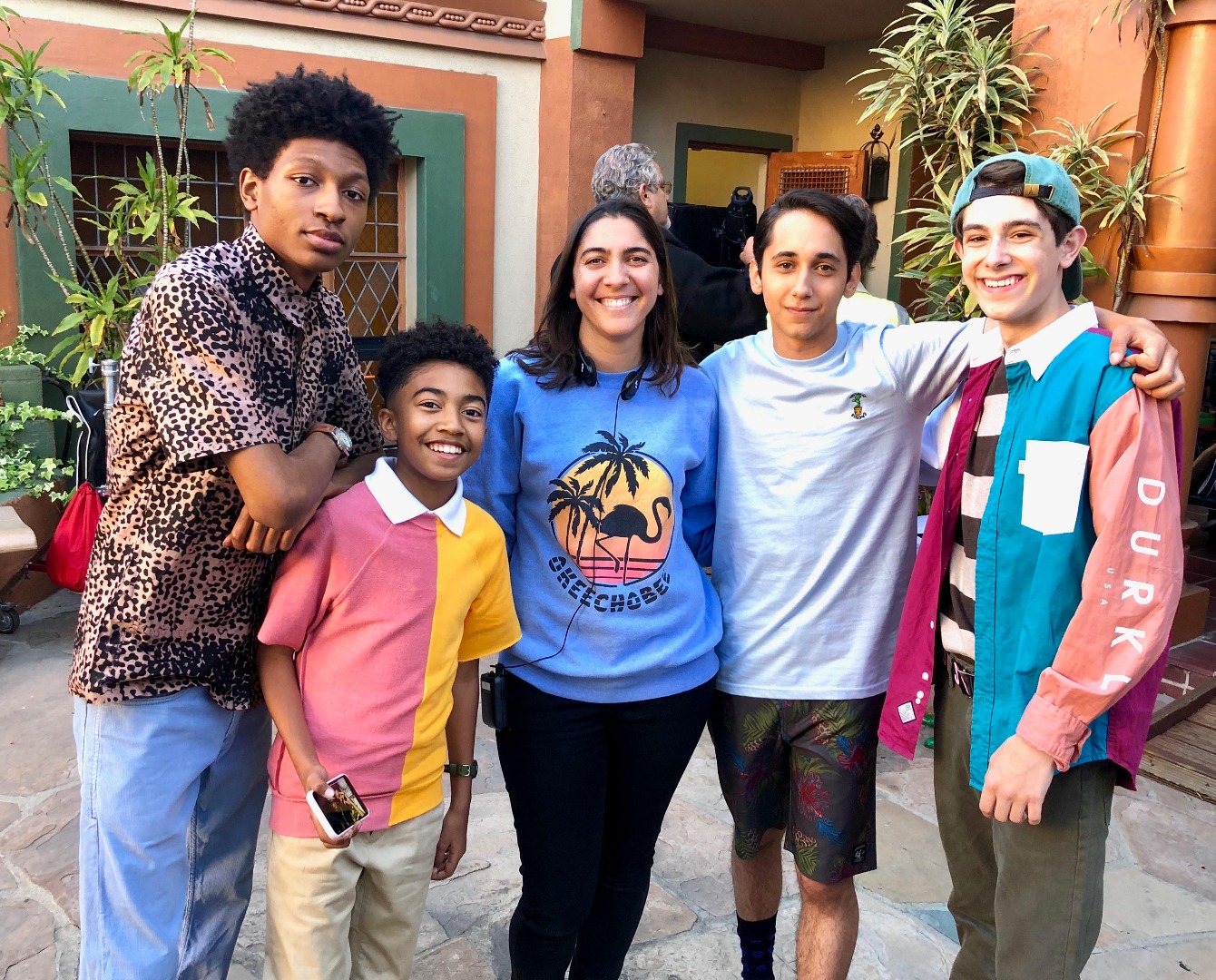 Suzy: How did you pull together the cast?

Bridget: We went through a lot of peaks and valleys.  We had the cast completely set up 2-3 three years ago; we had attached Rita Wilson in the beginning. But as things dragged out, we had to get a boy in just the right age. We were not able to cast Emmett until the project had some serious momentum. The break came when we were a part of Tribeca film institute’s AT&T Untold Stories program — and we won an award! After that we knew we had momentum and at that time, and we went after Miles Brown. He’d been on Blackish for five years and he was amazing.

We actually cold-called his agent and he committed very quickly. Then between winning the award, and having Rita Wilson, it allowed us to get the momentum we needed. It was such a phenomenally talented cast that we couldn’t have wished for better. We’d get on set and enjoy this group of the nicest people. Everybody was excited to come and play and have fun and show up every day.

Suzy: Can you share your insights particularly as women building and leading the project? Is the industry making progress in equality?

Vicky: Yes, progress. But it’s still difficult. We were at the Provincetown International Film Festival with The Volunteer. And we were in the midst of raising money and developing Emmett [Boy Genius] and a prominent female producer said to us, ‘If you were guys, you’d already be making your next movie.’ Here we were, we’d won a different festival with the film, we had Aunjanue Ellis and Mary Beth Hurt and so many excellent actors in the movie, we had great press, but it all didn’t go anywhere. When she said that, I actually didn’t know what to do with that information then.

Bridget: We’re often asked that question because the burden is on women to highlight how underrepresented women are! But interestingly the solution lies with men.

Women are traditionally over-mentored and under-sponsored which means they find it easy to get shadowing jobs on sets, and to watch other directors work, but they find it very hard to actually land the job. Another statistic (sadly) that comes to mind is that when a man makes his first feature film most likely his second one will be made two years later. When a woman makes her first feature film most likely her second one will be made 10 years later. And you know for Vicki and me, because now we’ve made four features together, a lot of short content, and we feel like we should be further along in our careers based on what we’ve been able to accomplish to date. Truly there are plenty of men out there feeling the same way. It’s a tough gig all the way around. With all the movement we see and all the sort of outrage we see, there’s still such a resistance to hiring women and people of color. We’re really conscientious and we intentionally hire more diverse crew and cast – both in front of and behind the camera.

Vicky: When I was little, I never thought I could be a filmmaker because the filmmakers that I knew were Francis Ford Coppola, Steven Spielberg. I didn’t see any women making movies, and I didn’t realize women could do it. If you can’t see a reflection of yourself  in the world somewhere, it’s hard to imagine the possibility. So yes, we have to create a reflection of how the world should be — not how, oftentimes, it really is. That’s one of our missions in our filmmaking.

Be sure to check out Boy Genius in Theaters and OnDemand and click here for the Dove Review!