Which happens to be, UHMMMM, 5 ingredients, 2 steps and, liiiiiiike, dessert for breakfast.

Can I make a bold statement and say that I am in LUHVE.

Really though, who are we kidding, a statement like THAT about something like THIS is not bold AT ALL.

This vegan smoothie bowl, my friends, is like that second grade birthday party that you threw where the kids ran around like crazy, threw candy everywhere, and your mom is still picking sprinkles out her hair… but it was the greatest time EVER.

Growing up is scary guys, and sometimes you just need a recipe that takes you back to the good ol’ days where you spent your time munching your way through Circus Animal Ice cream Cake amIright?

Minus the calories though. My 24-year-old metabolism just ain’t what she used to be.

(Sidenote: You should read that in an old man voice. You know, to get the full EXPERIENCE of this post.) 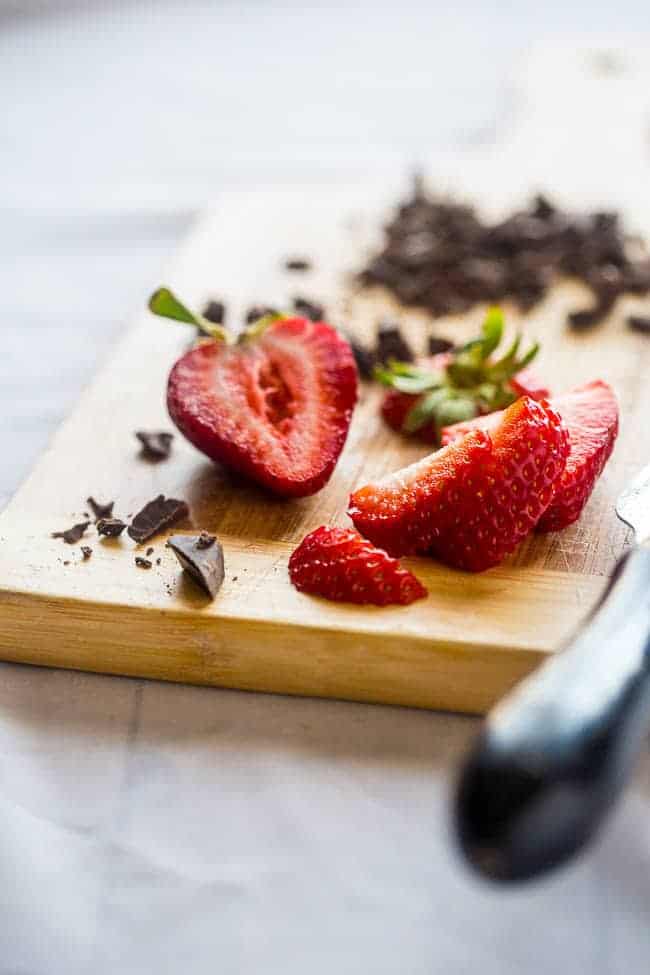 Anywho, that is where this banana split smoothie bowl steps its fun-filled, creamy little feet in. Please stop peering at me with those questioning little eyeballs of yours. I KNOW bananas don’t have feet.

That would just be awkward.

When I was making this recipe, and then I was done like .0003 seconds later, I was like “DO I EVEN POST SUCH AN EASY RECIPE?! WHAT IF MY CULINARY PROWESS GETS JUDGED OR QUESTIONED?”

But then I put the bowl in front of the hubs for the “second opinion taste,” turned my back for even less time than it took to blend frosted-frozen-sweet bananas and perfectly-light-vanilla almond milk to creamy, smooth deliciousness and then turned around to ask his thoughts…

POOF. Just a sad, little empty shell of smoothie bowl that once was, was left. I am preeeeety sure he actually LICKED THE BOWL CLEAN.

You can judge him. I do every day.

BUT, that sort of sealed the DEALIO.

If I’m being honest, the idea of sprinkles on my breakfast didn’t really hurt either. So they come highly suggested.

And if you’re not picking them out of your hair for years to come, well, our friendship could be over.

Because that just means you’re doing it WRONG.

— Sprinkles, Optional if not Paleo or Vegan

1. Place the roughly chopped bananas and almond milk into a blender and blend until thick, smooth and creamy.

2. Divide the smoothie between the 2 bowls and top with sliced strawberries, roasted peanuts, chocolate and optional sprinkles.

* You may need a little bit more almond milk, depending on the strength of your blender

** Use cashews or almonds for Paleo version

*** You could also use cacoa nibs or dark chocolate. for Paleo verison